Charting a Course with Energy Benchmarking

Hitting the weights with energy efficiency

Plans to reduce greenhouse gas emissions will rely on significant improvements in the efficiency of buildings and their use of electricity, natural gas, and other fuels. This will happen in many steps, and the “benchmarking” process offers a way to track a building’s energy usage, rate its performance, and identify the upgrades that are still needed.

Benchmarking refers to measuring a building’s utility usage and greenhouse gas emissions, and then comparing those rates to similar buildings. Benchmarking is conducted on a voluntary basis by building owners, but it is also a tool that’s increasingly being required by cities and states to identify trends and set goals for efficiency and energy use. The numbers vary by community, but the U.S. Energy Administration says that buildings use approximately 40 percent of the country’s energy.

At least six states and dozens of cities have enacted energy benchmarking policies, according to the Institute for Market Transformation. These laws vary in terms of the sizes of covered buildings (the square foot threshold) and the types of structure (public, commercial, housing). But they all have similar goals: measure current utility usage and greenhouse gas emissions; identify how buildings can be more efficient; compare and rate the performance of similar structures; use the data to chart a course for lower emissions; and track the progress toward those goals. 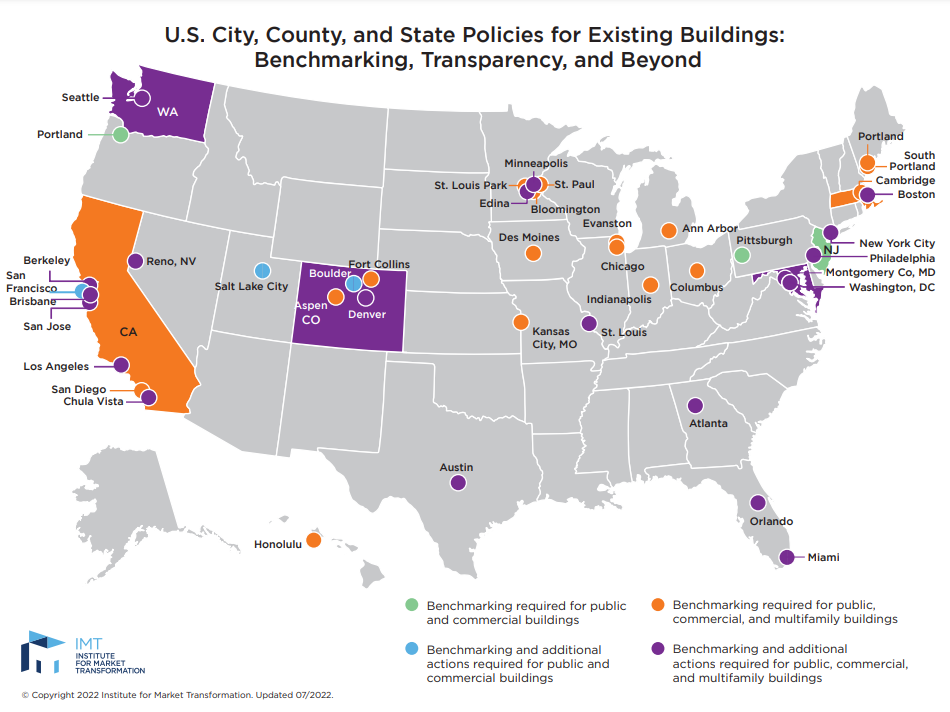 The Institute for Market Transformation tracks benchmarking laws and activity across the U.S. (Source: IMT)

Massachusetts has one of the newest benchmarking laws and will require owners to report data on energy usage for buildings above 20,000 square feet. Some cities in the commonwealth already have benchmarking rules. Boston’s Building Energy Reporting and Disclosure Ordinance requires this data for buildings larger than 35,000 square feet. Buildings are responsible for approximately 70 percent of greenhouse gas emissions in Boston, and the City said it will work toward the goal of net zero emissions by 2050. Like other benchmarking policies, the data for Boston is displayed online. For example, the Emerson College residence hall at 2 Boylston Place, with 103,963 square feet, has a greenhouse gas intensity level of 3.6 (kgCO2/sf) and an Energy Star rating of 73 (the median performance score is 50).

In Columbus, Ohio, the Benchmarking Ordinance requires building owners to provide electricity, gas, and water use data for buildings 50,000 square feet and larger. Columbus is using benchmarking as a step to achieve long-term emissions goals, which include an “ambitious pledge to make Columbus a carbon neutral community by 2050.”

Several cities in California have their own benchmarking programs, and the state requires the reporting of energy data for buildings larger than 50,000 gross square feet. Despite that high threshold for coverage, energy data in California was reported for 16,000 buildings for 2021. 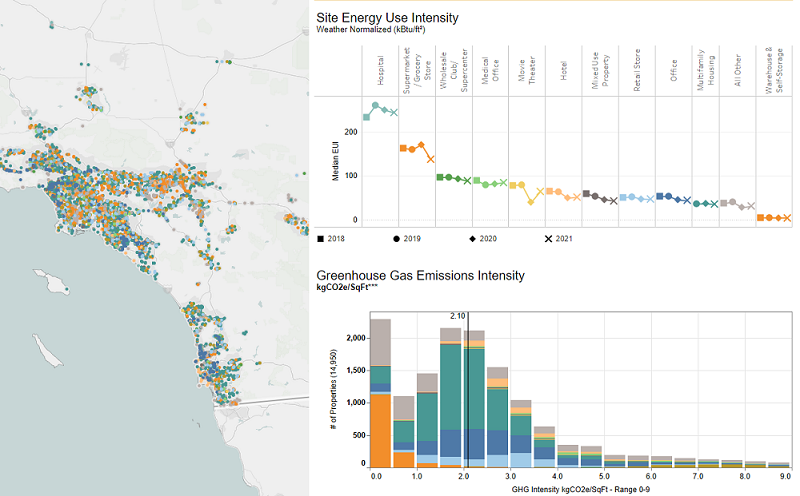 There are numerous state and local governments making their benchmarking results available to the public. This allows the data to be tracked and audited by independent parties so more efficient solutions for energy use can be explored. (Source: California Energy Commission)

An important law in New York City goes beyond benchmarking and calls for reductions in energy use and greenhouse gas emissions for certain buildings. Local Law 97 sets efficiency and emissions standards for most buildings over 25,000 square feet. These limits would start in 2024 as part of a goal to reach an 80 percent reduction in emissions by 2050. (In October 2022, the City published its proposed rules for complying with these emissions standards.)

Those are a few state and local examples, but new federal funding will support the benchmarking of thousands of multi-family housing properties. The Inflation Reduction Act of 2022, signed into law in August, includes support for energy and water benchmarking, with $42.5 million to track and analyze those utilities at the property- and portfolio-level.

To support this work, the U.S. Department of Housing and Urban Development released an RFI in October for utility outreach, benchmarking, and analysis of building performance. The contract’s scope will encompass significant housing stock: “Conduct energy and water benchmarking on behalf of property owners and agents (POAs) for approximately 40% of the Multifamily assisted portfolio (~585,200 units or ~9,380 properties).”

This federally sponsored project and many other benchmarking programs use the Energy Star Portfolio Manager to enter and track data on energy, water, waste, and emissions. Utilities are supporting this effort by aggregating building data and directly sending information to Portfolio Manager accounts.

IMS, a division of Dodge Construction Network, focuses on A/E/C consultants and covers benchmarking services as well as a range of energy projects that often become intertwined, such as Climate Action Plans, Greenhouse Gas Measurement and Verification, Annual Emissions Reports, and Sustainability Plans. (IMS tracks current RFPs on a daily basis and reports on future projects through Advance Notices.)

Some recent benchmarking projects that IMS covered for its architectural, engineering, planning, and environmental clients include:

* The City of San Diego released an RFP in October 2022 for technical support on benchmarking reporting, a revised ordinance, and building decarbonization (IMS 651055). These consulting services will support greenhouse gas emissions goals in the City’s Climate Action Plan and curbing the use of fossil fuels in buildings. Currently, the City’s ordinance requires energy benchmarking for most commercial and multifamily buildings that are 50,000 square feet and larger. The goal is to incrementally lower that threshold to 20,000-square-foot buildings by the year 2030. Along the way, the City will provide support for electrification and energy efficiency improvements. 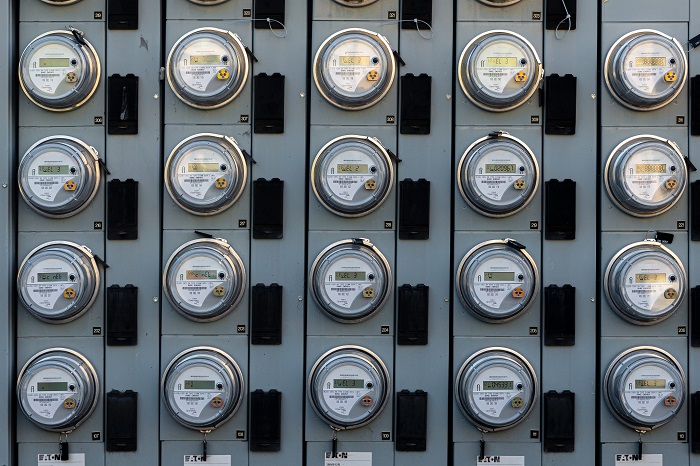 Being able to effectively audit the way a building uses natural gas and electrical power is a key component of energy benchmarking. (Source: Jon Moore)

* The Nevada Office of Energy released an RFP in October 2022 to develop a database to track the use of energy, water, and fuel in state-owned buildings (IMS 652004). This Carbon Management System will show how electricity, natural gas, water, and fuels are used in each building. The data will help the state assess energy consumption, determine which buildings are the best candidates for reducing emissions, and even integrate this energy and emissions data into the capital planning process.

* The City of Aspen, Colo., released an RFP in September 2022 for a software or service that can integrate with the utility billing and meter data for energy and water benchmarking purposes (IMS 649195).

Thousands of additional buildings will join the benchmarking process in the coming years as new laws are enacted and as existing rules widen their scope of coverage. The demand for consulting services also will grow as professional services are needed for energy audits and data verification. Benchmarking is just one component of energy and emissions strategies, but it’s a critical tool to show performance, pathways, and progress.