Jaywalking on another level

When traditional wildlife habitat is fragmented by busy roads, there is a danger to animals and drivers. On U.S. roads there are a million wildlife-vehicle collisions every year, with an estimated cost of $8.3 billion. Researchers are studying the most dangerous areas to identify collision hotspots while engineers are developing wildlife crossings that can take many shapes: culverts, underpasses, large bridge structures, and ramps. The animals using those structures are equally varied: elk, bear, deer, mountain lions, and panthers.

A new Wildlife Crossings Pilot Program, part of the federal Infrastructure Investment and Jobs Act, authorizes $350 million over five years for the design and construction of mitigation sites for animal passages. There is a dual focus on species protection and driver safety, and the law calls for further study into those million annual crashes as well as “the impacts of roads and traffic on habitat connectivity for terrestrial and aquatic species.”

The Wildlands Network championed this pilot program, and said the funding is a “significant step toward addressing the biodiversity crisis at the national level.” The group tracks wildlife movement (including mortality) and helps to identify those hotspots where hazardous conditions exist for both animals and drivers. Wildlife overpasses and other structures can have a significant impact along major highways that bisect the traditional range of cougars, elk, black bears, jaguar, and deer.

According to The Pew Trusts, the funding could be a great investment in driver safety and animal welfare. The organization says solutions and funding are needed where traditional animal corridors are divided by major Western highways in Wyoming, Oregon, and Colorado. For example, along I-80 in Wyoming, bridges or tunnels could offer safer passage to mule deer and other species as they try to reach their winter range. 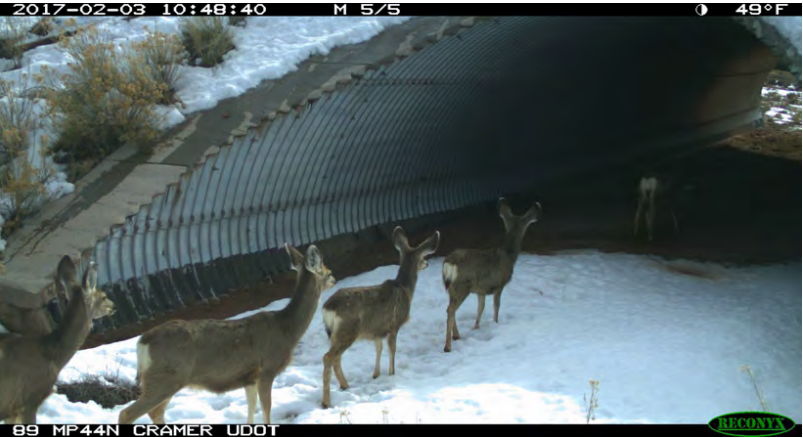 An ENR story by Tim Newcomb said the federal program could be a major source of support for these projects, and highlighted projects such as the overpass on I-90 in Washington state that offers “safe passage for elk, deer, bobcat and cougars” in the Cascade Mountains. Newcomb said wildlife passages have been used for decades to protect species such as the desert tortoise and the Florida panther.

In June 2022, the New Mexico Department of Transportation and the Division of Wildlife released a Wildlife Corridors Action Plan, which studied collision data, mitigation projects, habitat needs, and the behavior of animals along these road-divided landscapes. The report identified 60 hotspots based on wildlife-vehicle crashes involving large mammals such as elk, bear, or deer. These hotspots range from one mile to 24 miles long, and cover a total of 349 miles of the state’s roads.

The data show specific places with the highest risk to drivers and wildlife. For example, along a five-mile stretch of US 70, there were 18 crashes involving deer and 70 collisions with elk from 2009-2018. For 11 of these sites, researchers and designers proposed a series of mitigation projects. In the case of the US 70 site, the recommendations called for an overpass, five bridges to replace culverts, two arch culverts, and fencing.

“Roads in particular fragment habitat, and may prevent animals from meeting their nutritional and life history requirements,” the Action Plan said. “Wildlife-vehicle collisions (WVCs) not only present a well-documented risk to the safety of the traveling public; they can represent a significant cause of mortality in some animal species.” 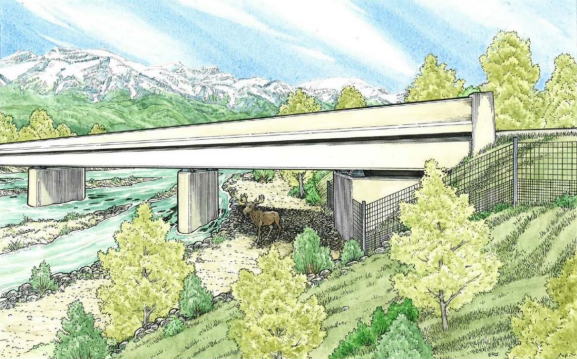 This concept drawing of a proposed WY 22 crossing along Snake River shows how wildlife-friendly barriers can encourage animals to use the safer underpass. (Source: Teton County Wildlife Crossings Master Plan)

But are these mitigation measures useful? A recent study analyzed images of 18,034 animals recorded by cameras at four mitigation project sites in New Mexico from 2017 to 2022. Researchers documented 14,242 cases where crossing structures were used by animals such as mule deer, elk, black bear, and mountain lions. The report concluded that the mitigation projects “markedly reduced collisions with wildlife” and gave animals a corridor to access different mountain ranges.

For IMS, the wildlife crossing projects are at the intersection of Roadway Design, Transportation Planning, and Biological Studies. While they are few in number, these projects will get a boost from the $350 million set to be released in coming years. (IMS, a division of Dodge Construction Network, focuses on A/E/C consultants, tracks current RFPs on a daily basis, and reports on future projects through Advance Notices.)

Some recent wildlife passage projects that IMS covered for its engineering, planning, and environmental clients include:

* The Santa Clara Valley Habitat Agency in California released an RFP in October 2022 for engineering and environmental services to plan, design, and environmentally clear a wildlife overpass spanning the Pacheco Pass section of State Route 152 (IMS 642891).

* The State of Colorado issued an RFP in July 2022 to conduct an evaluation of the effectiveness of the wildlife mitigation features of the SH 13 Fortification Creek Project for reconstructing and widening the roadway and creating safe passage for migrating deer and elk, to increase motorist safety (IMS 637433).

* Teton County, Wy., released an RFP in July 2022 for design services for wildlife crossings at three locations: US-26/89/191 in the Camp Creek area; North US-89/191; and SH-22 on the west side of the Teton Pass (IMS 637600). Those sites were identified in the Teton County Wildlife Crossings Master Plan, which recognized the diverse species in the Yellowstone Ecosystem as well as rapidly growing traffic volumes. Mitigation measures were analyzed, although the recommendations vary by the type of roadway and species/habitat. “However, wildlife fences in combination with wildlife crossing structures (i.e. overpasses and underpass) have been identified as the most effective and robust mitigation measures that address both the human safety and the biological conservation concerns and that can often be justified based on human safety-based economics alone,” the Master Plan said. 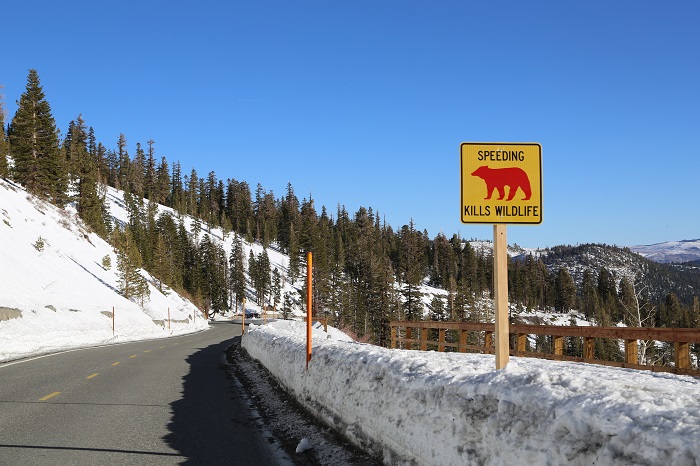 * The Missouri Department of Transportation released an RFP in June 2022 to develop ways to monitor the movement of small animals through wildlife median barriers on the I-49 corridor (Bella Vista Bypass) in McDonald County (IMS 634776).

* The Colorado Department of Transportation issued an RFP in April 2022 for construction management, construction, and materials testing services for the I-70 Genesee Wildlife Crossing Project, which included an underpass and fencing (IMS 625080).

In recent years the focus on wildlife mitigation projects has widened to include more mammals, especially large ones like elk, deer, bear, and mountain lions. The safety of drivers, the cost of these collisions, and the toll on wildlife is prompting new studies that identify hotspots and new designs that are proven to be effective. Look for more planning and design services as rules are finalized for the federal Wildlife Crossings Pilot Program and funding is released for these projects.