A newer class of HVAC

The demand for engineering services to evaluate and design HVAC systems has spiked in the past two years, according to an analysis of public sector projects tracked by IMS (a division of Dodge Construction Network focused on A/E/C consultants).

Some of this growth can be attributed to state and federal programs that are helping school districts replace old or inefficient HVAC systems, such as CalSHAPE, the Elementary and Secondary Schools Emergency Relief Acts (ESSER), and other indoor air quality programs.

Improving HVAC systems at schools will lead to a more comfortable environment for students and educators, while increasing energy efficiency. (Source: U.S. Department of Energy)

(These figures represent RFP/Qs for consulting services from public agencies such as school districts, cities, and states. Dodge Construction Network is tracking tens of thousands of contracting projects in the public and private sectors.)

The billions in funding and the growth in projects is sorely needed. According to a review of school facility conditions by the U.S. Government Accountability Office, HVAC systems are the most needed improvement at K-12 public schools. “An estimated 41 percent of districts need to update or replace heating, ventilation, and air conditioning (HVAC) systems in at least half of their schools, representing about 36,000 schools nationwide that need HVAC updates,” the GAO said in June 2020.

Several state and federal programs are helping to fund these HVAC upgrades.

The October 2022 Grant List for proposed awards breaks down the funding to thousands of schools, with a total of $304.8 million to upgrade HVAC systems and $28.4 million in funding for plumbing improvements. The California Energy Commission expects the program’s total value to reach $600 million to $700 million, according to the 2021 Annual Report.

IMS has covered 13 consulting projects to support CalSHAPE projects from June 2022 to November, with more expected. These RFPs seek engineering services to assess HVAC and plumbing systems as well as for design and implementation services. For example:

* The Fontana Unified School District in San Bernardino County released an RFQ in November for comprehensive engineering and implementation services related to the development and administration of the CalSHAPE Ventilation and Plumbing Programs (IMS 654693). 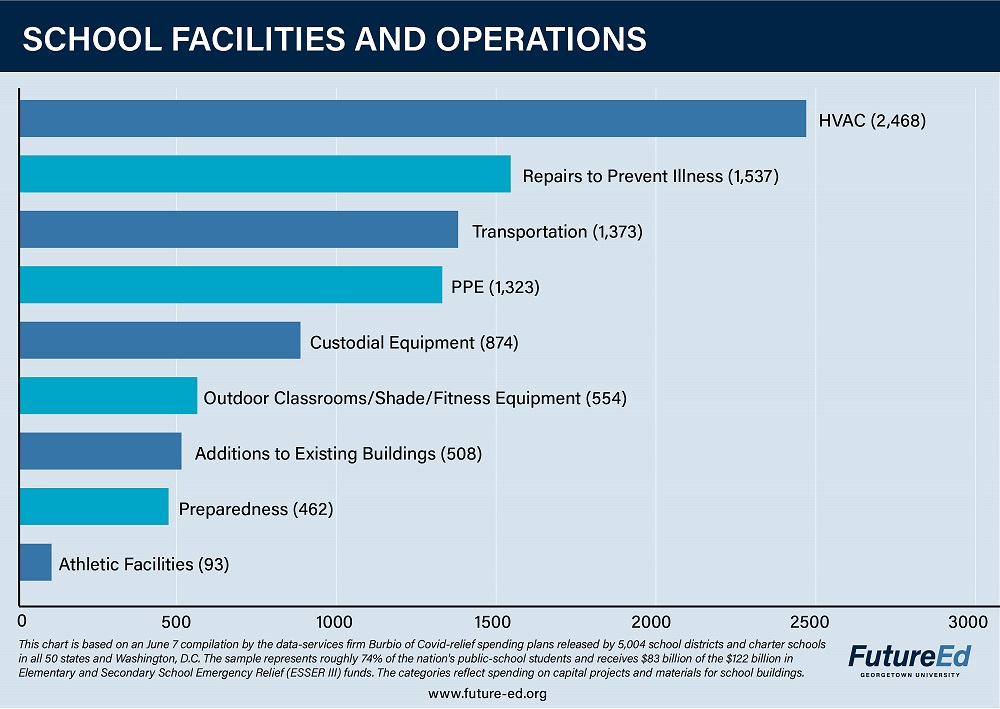 A significant amount of ESSER funding has been directed towards HVAC improvements. (Source: FutureED)

* The San Marcos Unified School District issued an RFQ in October 2022 to assist the District with the estimate, application, design, assessment, implementation, documentation, and reporting requirements for the CalSHAPE Program. The project will include ventilation system testing, filter replacement, and carbon monoxide monitoring (IMS 650758).

And CalSHAPE is just one of many state programs.

In Connecticut, a new grant program was signed into law in 2022 to assist school districts with upgrading HVAC systems and other indoor air quality projects. The law created a $150 million reimbursement program for HVAC improvements. Applications from public schools were due December 1, and grants will be awarded in early 2023, according to the state. The projects will require professional engineering studies and designs, and the contracting services must be competitively bid.

Vermont’s School Indoor Air Quality Grant Program is using funding from the American Rescue Plan for schools to invest in upgrades to HVAC systems. According to Efficiency Vermont, “This year’s effort builds on the success of a previous round of IAQ programming, which in 2020 leveraged $17 million in federal funding to help 365 Vermont schools improve indoor air quality through HVAC upgrades and air quality monitoring. As a result, more than 62,000 students and 6,500 teachers now spend time in K-12 schools with improved HVAC systems that bring fresh outside air into the building. More than 140 companies, including contracted engineers and tradespeople, worked on these projects.”

Other states are also using ARPA funding to support these school projects. Massachusetts announced in September that it would make $100 million available for schools to improve HVAC and air quality systems. 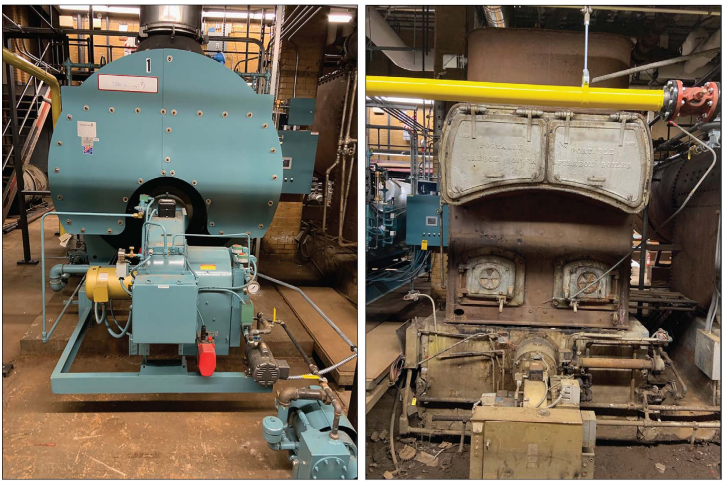 Some school districts have been operating on HVAC equipment installed when the Empire State Building was completed. Programs like CalSHAPE and ESSER aim to replace old boilers, like this one from 1931 (right image, replaced by a newer unit in the left image). (Source: U.S. Government Accountability Office)

Then there is the billions of dollars in recent federal funding.

The FutureEd think tank at Georgetown University’s McCourt School of Public Policy analyzed the Covid-relief spending plans for 5,000 local education agencies, which represent 74 percent of the county’s students. The school districts in the study will receive about $83 billion in ESSER funding, and FutureEd’s analysis shows HVAC systems as a top priority for school facilities and operations.

According to FutureEd, “Nearlyhalf [sic] the districts and charters in the sample expect to spend money on school climate systems, and HVAC is a top-three priority in every region. The spending averages out to about $394 per student across agencies choosing this option. The plans range from thousand-dollar investments in filters that block the spread of the virus to multi-million-dollar plans for replacing entire HVAC systems.”

Other programs are on the horizon. The U.S. Department of Energy is kicking off the first round of its Renew America’s Schools program, with up to $80 million available. The program will fund HVAC, lighting, controls, and ventilation improvements, as well as renewable energy and vehicle projects. Concept papers for the first round of grants are due January 26, 2023, with full applications due April 21, 2023.

These programs will help meet the massive and ongoing need for HVAC improvements. As school districts find these new sources of funding, engineering services are needed at every step, from condition assessments, grant applications, specification development, and delivering the project. It’s important work with long-term payoffs, since HVAC upgrades at schools are an investment in energy efficiency, safety, comfort, and even educational performance.