A major expansion of the Panama Canal is set to change the dynamics of global shipping and create a demand for East Coast and Southern ports with the capacity to handle giant container ships. It’s an opportunity that has fueled investments in dredging projects, new berths, terminals, massive cranes, and infrastructure to improve the connections between container ship off-loading and interstate highway on-ramps.

The $5.25 billion widening and deepening project — expected to be completed in 2016 — will allow “Post-Panamax” ships to transit the Panama Canal carrying up to 15,000 containers. That’s a threefold increase over the current limit. Those mega-ships will have an all-water access route to the East Coast from Asia rather than docking at West Coast ports and loading the goods on railcars. West Coast ports are feeling pressure to stay competitive in coming years, while East Coast and Southern ports are eager to meet the increased capacity demands created by Post-Panamax ships. 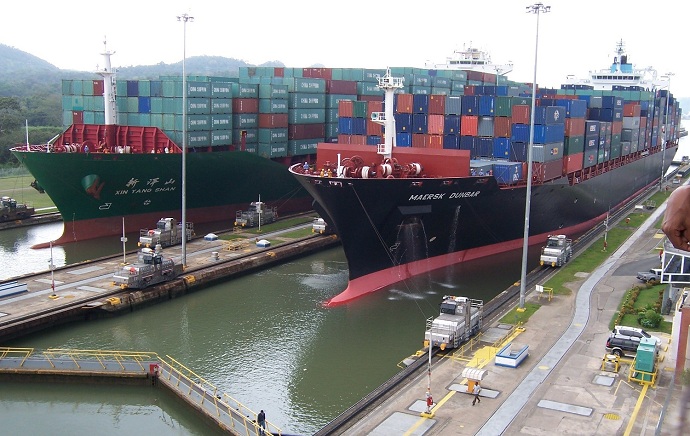 A study in early 2015 by NAIOP, the Commercial Real Estate Development Association, reviewed the status of several major East Coast and Southern ports in anticipation of the Panama Canal project. “The ports will need to have waterside infrastructure in place to handle the larger Post-Panamax ships that will navigate the expanded canal.” said the NAIOP report. “They also will need to have landslide infrastructure in place to handle the increased volume of container traffic.”

In Florida, there is a proposal to spend $700 million on a 13-mile dredging project for the Jacksonville Port Authority (JAXPORT). “Deepening the port is to allow us to compete and handle the ships of the future that are going to be carrying the cargo to the East Coast ports,” said JAXPORT CEO Brian Taylor in an October 2015 interview with PBS.

A channel deepening project is also planned for Port Everglades.  Another project there would add five new Post-Panamax container cranes during the next 20 years.

Further south, the Port of Miami has completed a new $900 million tunnel project to link port facilities with interstate highways in advance of the Panama Canal expansion.

Georgia is home to two fast-growing seaports, Brunswick and Savannah. Brunswick is slated to see $152 million in improvements – such as a new berth – during the next 10 years. Meanwhile, Savannah Harbor is making progress on a $100 million dredging project in the outer harbor. According to the Georgia Ports Authority, “Better accommodating Post-Panamax vessels in Savannah will reduce transportation costs for U.S. companies moving goods through the port by 20 to 40 percent.”

Image courtesy of US Department of Transportation

A new terminal at the Port of Charleston, South Carolina is expected to boost capacity by 50 percent after it opens in 2019. The Charleston Harbor Deepening Project received approval from the U.S. Army Corps of Engineers in September 2015. This project would deepen most of the shipping channel to 52 feet. According to a report from NAIOP, the project was “contemplated in direct relation to the expansion of the Panama Canal.” The Port of Virginia is already receiving Post-Panamax ships and means to stay competitive with investments in its VPA 2040 Master Plan. The strategy includes expanding terminal capacity, remaining flexible to new opportunities, and coordinating terminal access improvements with state transportation and economic development plans.

The Port of Houston’s significant infrastructure has helped make it the leader in the U.S. for foreign waterborne freight. It has the capacity to accommodate increased traffic but may face challenges with increases to shipping volume in the broader Houston Ship Channel, according to NAIOP.

The Port of Baltimore has prepared for the Panama Canal expansion by expanding its harbors, a berth, and cranes.

These are significant projects with long-term potential paybacks. And they are by no means the county’s only pending port projects. In early 2015, the American Association of Port Authorities conducted a survey to determine the need for investments in port infrastructure. The Association identified $28.9 billion in 125 port-related freight network projects, such as intermodal connectors, gateway and corridor projects, and on-dock rail projects. “Seaports are the backbone of a thriving 21st century global economy,” the Association said. “Yet, a nation’s freight transportation system is only as good as its underlying infrastructure.”