State and local laws to keep food scraps out of landfills are leading to the development of new composting facilities to help manage these materials. Even without laws on the books, more and more communities are accepting food scraps and turning that would-be waste into valuable compost.

Food waste is actually the largest component of municipal solid waste, according to the U.S. Environmental Protection Agency. About 22 percent of trash is food waste, and only about 4 percent is diverted for composting. (Composting is not the answer to the problem of food waste: much better options include source reduction, smarter planning by consumers, and feeding hungry people and animals.)

A California law that went into effect in 2022 requires cities and counties to create plans for keeping organic materials out of landfills. A Vermont law in its second year bans food scraps in trash or landfills and now “residents are separating their food scraps into buckets or bins and either using local food waste drop-offs (like transfer stations), curbside food scrap haulers, or composting in their backyards.”

Several other states have laws for scrap food collection, and some cities have taken the lead on organic material diversion. The City of Austin, Texas, requires businesses with a food permit to prepare an annual plan to meet the organics diversion requirements. It includes education on food donations, waste reduction programs, and composting.

Landfills can be a significant source of methane, a known greenhouse gas. (Source: EPA)

“Before the ordinance, Seattle sent approximately 100,000 tons of food waste 300 miles to a landfill in eastern Oregon each year. This resulted in higher costs and greenhouse gas emissions,” according to Seattle Public Utilities. “Today, Seattle sends more than 125,000 tons of food and yard waste to composting processors. The material is now turned into compost for local parks and gardens.”

Many other communities are now offering separate collection systems for food waste at their transfer station or through their waste/recycling collection service. Diverting the food waste for composting keeps the material out of landfills, but it also helps to reduce the amount of methane emissions. Methane is released as food waste in a landfill undergoes anaerobic fermentation; in composting, the microbes that produce methane are not active when oxygen is present. Methane emissions from landfills in 2020 represented about 14.5 percent of the country’s total methane emissions, according to the EPA.

IMS has recently seen several planning and design projects related to food waste and composting. More of these are expected as new laws take effect to regulate solid waste and other pollutants. (IMS covers current RFPs on a daily basis and tracks future projects through Advance Notices for its A/E/C clients.) A few examples of composting-related projects include:

* Washington State released an RFP in March 2022 for consulting services to characterize materials collected for recycling and composting, including a review of contamination issues and the types of outgoing materials destined for recycling markets (IMS 620255). 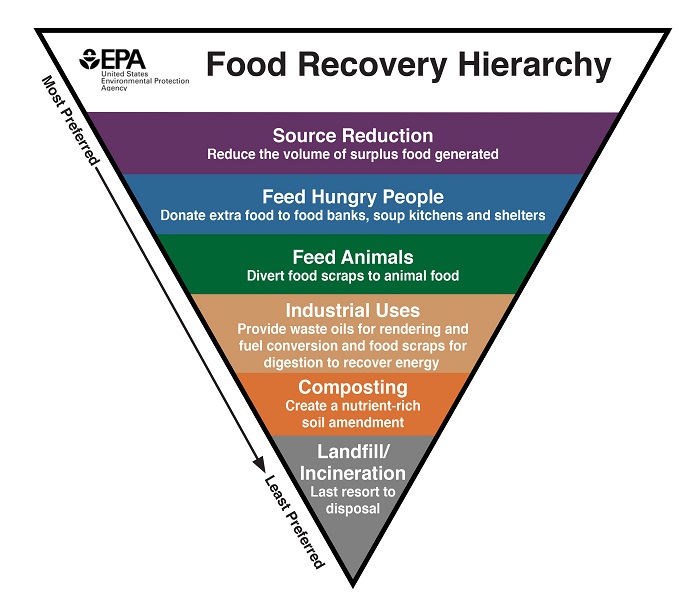 The EPA has identified a hierarchy of the most preferred methods for reducing the impact of food waste on the environment.

* The City of Kirkland, Wash., issued an RFP in March 2022 for technical assistance and outreach services for multifamily residents and property managers, focusing on adding compost service and increasing the usage of compost carts (IMS 617569). In a January 2022 RFP, the city sought an outreach consultant to provide direct technical assistance to commercial solid waste customers to help them reduce waste and single-use items (IMS 607495-1).

* The City of Weatherford, Texas, released an RFQ in February 2022 to prepare a feasibility study and implementation plan for the new Western Regional Composting Facility (IMS 611213).

* The City of Bellingham, Wash., issued an RFP in January 2022 for several community outreach programs for the requirements of Ordinance No. 2021-05-023 for reducing single-use plastic waste and encouraging compostable or reusable alternatives (IMS 609019).

* The City of Banning, Calif., released an RFP in January 2022 for a “Land Analysis for Identifying the Application of Compost/Mulch.” The project will evaluate the use of compost/mulch on City-owned and managed lands and identify the top privately-owned lands and landowners that can utilize City-provided mulch/compost (IMS 607527).

There is a massive environmental impact from food loss and waste, and it’s documented in a 2021 report from the EPA, “From Farm to Kitchen: The Environmental Impacts of U.S. Food Waste, Part 1.” 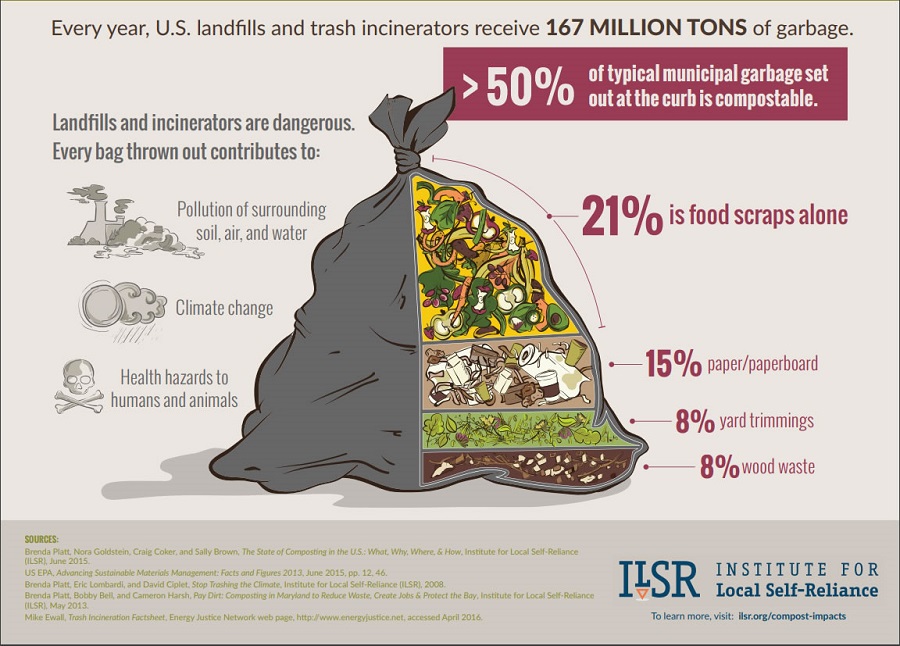 Many municipalities are pushing for a variety of composting solutions to the food waste problem, including at-home residential composting and pick-up of food-only garbage. (Source: ILSR)

The EPA estimated that the amount of food lost or wasted ranges from 161 to 335 billion pounds per year. “Over one-third of the food produced in the United States is never eaten, wasting the resources used to produce it and creating a myriad of environmental impacts,” the EPA said. “Roughly half of this food is wasted during the consumption stage (households and food service), and fruits and vegetables and dairy and eggs are the most frequently wasted foods.”

Part 2 of the EPA’s study on food waste is expected to be released soon, and it will focus on what happens when a product goes from “food” to “waste.” This will give new insight into the impact on landfills, composting, and other waste management strategies.

Many households, businesses, and organizations are already keeping food waste out of landfills and adding it to compost piles. It’s a crucial part of reducing waste and cutting methane emissions and other greenhouse gases. For professional services firms, there are more opportunities for outreach programs, waste characterization studies, designs for large-scale composting facilities, testing, and planning services to use the compost.