Recent reports on roadway safety have found sharp increases in the number of pedestrian deaths caused by car crashes. And in 2020, the number of traffic deaths rose even as fewer cars were on the road.

A report from the Governors Highway Safety Association in March 2021 found a disturbing increase in pedestrian fatalities last year. In the first half of 2020, when there were fewer cars on the road due to the Covid-19 pandemic, nearly 3,000 pedestrians were killed by drivers, the Association reported. It seems like a paradox but with fewer cars on the road, people drove faster not safer. According to the report, “the U.S. pedestrian fatality rate rose 20% in the first six months of 2020 as speeding, distracted and impaired driving, and other dangerous driving behaviors increased during the Covid-19 pandemic.”

“Walking should not be a life and death undertaking, yet many factors have combined to put pedestrians at historical levels of risk,” said GHSA Executive Director Jonathan Adkins in a news release. “The traffic safety community should focus on a comprehensive approach that uses every tool available to save lives, including engineering, community outreach, emergency response and equitable enforcement that prioritizes the prevention of driving behaviors – like speeding, distraction and impairment – that pose the greatest threats to non-motorized road users.” 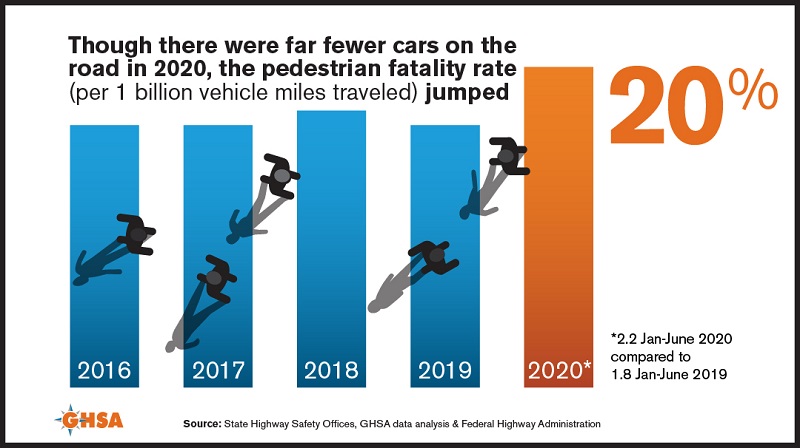 Even with a decrease in vehicles on the road due to COVID, pedestrian fatalities rose. (Source: GHSA)

In another report released in March, “Dangerous by Design 2021,” Smart Growth America found a 45 percent increase in the number of people hit and killed by drivers in the last decade.

According to the report, “Between 2010 and 2019, drivers struck and killed 53,435 people while walking throughout the United States, more than 14 people per day on average.”

The report takes aim at roadway designs that prioritize speed rather than safety. Illustrations in the report show examples of unsafe streets as well as designs that can make roadways safer. For example, it is more dangerous when there are wide lanes, no crosswalks, longer distances between signals, and higher traffic speeds. It is safer with signalized crosswalks, shorter distances between intersections, lower speed limits, and right-angle turn lanes that slow traffic and shorten the crossing distance for pedestrians.

In the last decade, as pedestrian fatalities increased 45 percent, the “Dangerous by Design” report said there was a 3.7 percent increase in motor vehicle deaths of drivers and passengers.

However, grim statistics on driver fatalities in 2020 were also released in March. The National Safety Council reported that 42,060 people died in motor vehicle crashes last year, an 8% increase from the previous year. That increase came during the pandemic when the number of miles driven fell 13%.

“It is tragic that in the U.S., we took cars off the roads and didn’t reap any safety benefits,” said Lorraine Martin, president and CEO of the National Safety Council, in a news release. “These data expose our lack of an effective roadway safety culture. It is past time to address roadway safety holistically and effectively, and NSC stands ready to assist all stakeholders, including the federal government.”

These numbers are startling, in part, due to the billions of dollars and thousands of projects designed to improve roadways, sidewalks, and bikeways. IMS covers street design and transportation planning services for its architectural/engineering/consulting clients, and sees examples of these projects every day. 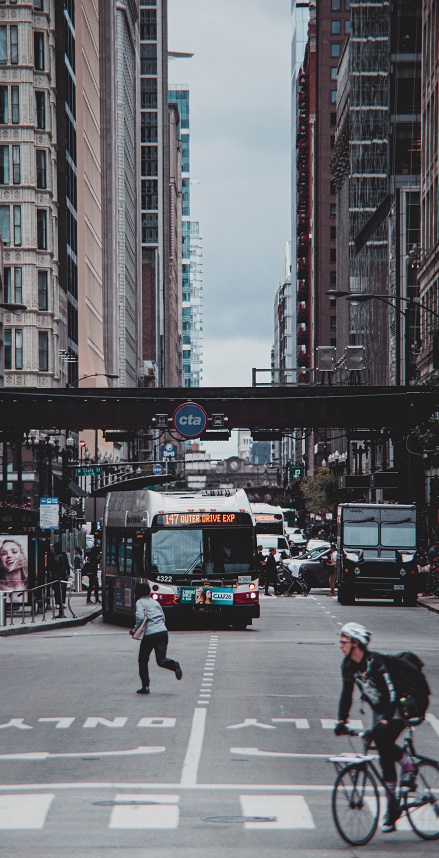 Re-imagining roadways and intersections with pedestrians in mind can make it safer for both drivers and non-drivers alike.

Many agencies and municipalities are working on these issues, and IMS tracks Requests for Proposals/Qualifications when agencies seek outside consultants. In the last three months, five communities released RFPs related to Vision Zero campaigns. Another 20 agencies issued RFPs to support the planning and design of Complete Streets. There were 15 RFPs for Safe Routes to Schools projects. And 10 additional RFPs sought engineers for pedestrian safety improvements. For example:

* The State of Maryland released an RFP in March 2021 for a Safe Routes to School program to identify infrastructure and programming to improve safety conditions for children who walk and bike to school (IMS 562932).

* The City of Stockton, Calif., released an RFP in March 2021 for an engineering firm to design Safe Routes to School safety and connectivity improvements such as high-visibility crosswalk striping, rectangular rapid flashing beacons, improved signage, bicycle lanes, and sidewalks (IMS 472104-2).

* The City of Yorba Linda, Calif., released an RFP in February 2021 to prepare a Local Roadway Safety Plan to evaluate the overall system and determine what improvements can be made to increase vehicle and pedestrian safety (IMS 554232).

Clearly, these projects are not enough. But they do show the effort by states and communities to protect pedestrians, bicyclists, and drivers.

The State of Texas, for example, is promoting roadway safety with its campaign of #EndTheStreakTX. (The “streak” refers to 20 years of daily deaths on the state’s roads.) In a March 2021 news release, the Texas Department of Transportation said, “pedestrian deaths are continuing to rise in Texas, and now account for 1 in 5 of all traffic fatalities.”

The TxDOT noted that it has spent $153 million in state/federal funds since 2015 on projects to improve pedestrian accessibility, safety, and mobility. Another $116 million in grant funding went to local projects for safe routes to schools and other walking and bike paths. 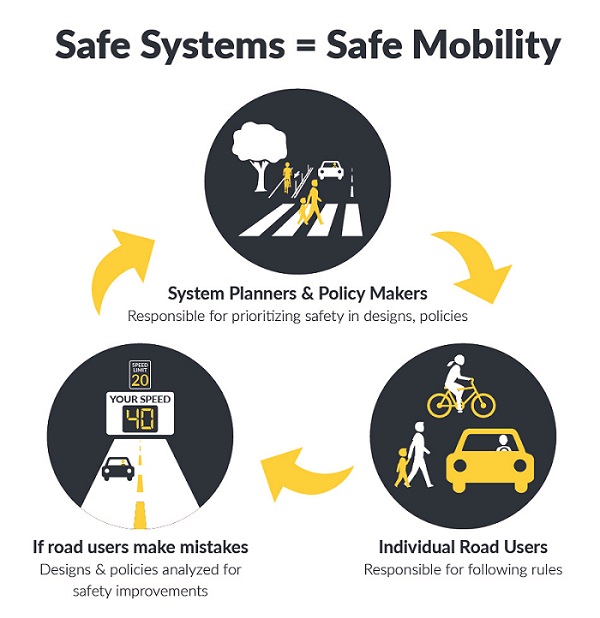 Local governments will need to plan, and follow through on those plans, for their transportation projects to take pedestrian safety into account to reduce the danger posed by vehicles. (Source: Vision Zero)

Still, the streak is not broken: “Earlier this year, during the height of the COVID-19 pandemic, traffic levels on Texas highways dropped nearly 44 percent in some parts of the state,” the TxDOT said in another news release. “This decrease in traffic encouraged TxDOT to think the horrific streak might finally come to an end. Instead, the death rate was unchanged, even with fewer drivers on Texas roads.”

The Vision Zero Network – which promotes “safe, healthy, equitable mobility for all” – reacted strongly to these recent traffic fatality reports. The Network is calling for #ZeroTrafficDeaths in the U.S. by 2050.

In response to the report by the National Safety Council, the Vision Zero Network called for elected officials to make strong commitments to safety, and to start with strategies that are known to work. “Strategies that are proven to prevent road deaths include: reducing speed limits, re-designing streets to be safer and calmer, increasing public transit, and requiring safety technology in vehicles, amongst other tools,” said Leah Shahum, Director of the Vision Zero Network. “We have the tools to prevent so many tragic deaths and injuries, and we need the political will to use them.”